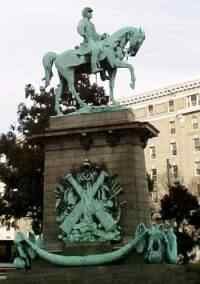 Living in DC, we get our fair share of circles to drive around. On many of them there are statues of war heros. I rarely check out who they are and what they did, but ever since i read this little fact i’ve been much more interested:

The two guys near me are George McClellan on Connecticut Ave (photo to the left) who was a badass. He was a general in the Civil War and the Democratic presidential candidate opposite Lincoln (in 1864). He was injured in battle. I know because i see that the leg is up.

The other one near me on Mass Ave is Philip Sheridan. He took 5 years to graduate West Point (George McC finished 2nd in his class). His’s first combat command l 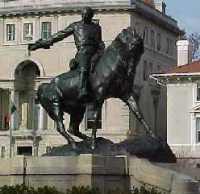 ed him to win the critical Battle of Chattanooga in 1863. Grant put him in charge of cavalry for the Army of the Potomac in 1864 and he led the raid on Richmond that ended in the death of Confederate general Jeb Stuart. He became commander of the Army of the Potomac in 1864. In this capacity he led the army to battle at Appomattox and, with Grant, compelled Gen. Robert E. Lee to surrender, ending the Civil War. In 1884, he succeeded Sherman as commander in chief of the Army. Not too shabby.

The statue was designed by the guy who did Mt. Rushmore and the horse (named Rienzi) is famous too and on display at American History Museum.

There is a site (here) that will tell you who is who on the horses in and round DC. If you have a home in DC, it’s worth checking out.

Qloud Fundraising: Striking out in Silicon Valley (Part 2 of 14)
DC is dangerous!!
The Who?
Pearl Jam Revisted