Here’s a list of my favorites for 2007. I originally wanted to list 10, but then i realized that i hadn’t really listened to 10 albums. I’ve listened to lots of tracks, but not really 10 full albums. So here are the top albums of 2007 for me.

The album jams. That’s all i can really say. These guys have good lyrics and they hit hard. You have to be in the mood for the Monkeys but if you are, it’s pretty damn satisfying. As people say, “Arctic Monkeys play a less hooky brand of brat-punk than a lot of their peers and predecessors, but their off-kilter song structures—and Alex Turner’s witty, effusive descriptions of youth culture—make them every bit as unique and vital as their supporters claim.” While the albums is pretty much the same stuff as their first album, it’s still good. I also saw them live this year which increased my enjoyment as i was able to fully appreciate their skills

#4: Because of the Times by Kings of Leon

KOL are weird and strange and shrieking but they really deliver. The two songs “Ragoo” and “Fans” are truly great songs. The rest of the tracks grew on me over time, especially after i saw them live. They have a great sound and they are one of the last true rock bands. Most of the artists today are emo, electronic, pop, or some mix of all 3. These guys are just old school rock.

I was introduced to this by Tiger in December and the first time i heard it, i was hooked. The first track “Time To Pretend” is fantastic. They are rock mixed with electronic so you can jam and dance at the same time. A very, very enjoyable album 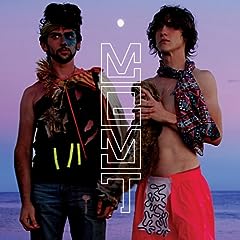 #2: The Stage Names by Okkervil River

This album is amazing.  It has depth in a way most others don’t.  It also rocks in a traditional rock ‘n roll way of rocking.  Let’s just say there’s only one CD i bought for someone as a present this Christmas and it was this one.  I like this review:

Usually, we go through life in a hazy bliss, emotionally and spiritually dead to what is going on around us. Sometimes, it takes something glorious to snap us out of this haze. Sometimes, it comes in the form of a new album from a band that is by leaps and bounds becoming one of the best currently making music. Am I speaking nonsense? Maybe, but then again you wouldn’t think so after you heard Okkervil River’s The Stage Names. Yes, this is an “indie” rock album but the layers and substance that fill and encompass it are utterly unmatched. In many ways, this album is the kind of musical collection that could alter your discernment and overall attitude on life.

While that’s going a bit far, it’s still a great album.  Check it out.

#1: In Rainbows by Radiohead

I was never a huge Radiohead fan but i really love The Bends. I was skeptical when the new album came out. That said, this was the one album of the year that i kept playing because it was so easy to listen to. This is what i just read in the AV section The Onion and i agree completely so i’m just going to repost it: “First, Radiohead announced the completion of a new album that few people even knew was in the works; then, the band said the record would be for sale in a week. And the price of this unexpected bounty? Whatever people wanted to pay, be it £100 or sweet fuck-all. After all that brilliant hype-stoking, the biggest surprise was that In Rainbows wasn’t some collection of afterthoughts or off-putting avant-garde exercises, but an honest-to-goodness Radiohead album—and an excellent one at that. Matching the glitchy sound of Kid A and Amnesiac to the fully developed rock songwriting of Pablo Honey and The Bends, Radiohead delivered its best album since OK Computer, renewing its heartfelt exploration of how the organic and the electronic can exist in creaky harmony.” You can download the entire album here.