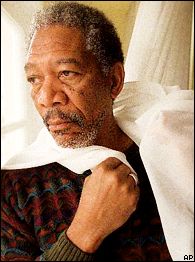 While reading the highly entertaining mailbag by Bill Simmons, i read this from one of his readers:

Recently, Morgan Freeman came to my town to help celebrate the opening of one of his restaurants, Pig ‘N Whistle BBQ. He came around and greeted every table and talked with each guest, and everyone was getting their picture taken with him. I had a stroke of genius, though, and had my phone out. When Mr. Freeman reached our table, I asked if he would be so kind as to record a message for me. He said yes. Now I have this on my cell: “This is actor Morgan Freeman, Barnz is away from his phone right now but leave a message and he will call you back, I hope … I hope.” Is there a better choice for voicemail and a specific person to leave it?
— Barnz, Fayettesville, Ark.

That’s truly amazing.  Of course Bill provided a few that he’d rather see:

2. Jack Nicholson: “This is Jack Nicholson. Bill isn’t home right now. You’re entitled to leave a message for him. Just know that I have neither the time nor the inclination to explain where he is, especially to someone who rises and sleeps under the blanket of the very freedom that I provide and then questions the manner in which I provide it. I would rather you just said ‘thank you’ and went on your way. Either way, I don’t give a DAMN what you think you’re entitled to!!!”

3. Al Pacino: “Hi, this is Al Pacino. I don’t know where Bill is right now. But I do know this. Life is just a game of inches. I am still willing to fight and die for that inch because that is what LIVING is!!! The six inches in front of your face!!!!! Now I can’t make you leave a message. You gotta do it. So wait for the beep.”

4. Buffalo Bill (from Silence of the Lambs): “This is Jame Gumb answering Bill’s cell phone. Bill’s not here. (Long pause.) Is this a great big fat person?”

It’s pretty funny – can you think of  anything better?