When there’s something serious on the line, that’s when players try their hardest – and THAT is definitely the best time to be watching sports. You see it in the NBA playoffs, in March Madness and you’re seeting it now in the last few games of the MLB season.  Two teams – the Boston Red Sox and the Tampa Rays – are battling for the wild card spot.  Last night, they were tied with 2 games left.  They both won by 1 run last night to keep it tied with 1 final game left.   Both those games were tight with tension.  Both teams lettign it all hang out.  Let me share some things that happened last night (posted here in ESPN):

So, all of this happened on Tuesday in two games in the American League, where all that’s at stake is a playoff spot, one team trying to avoid a colossal collapse, the other team trying to prove that small-market franchises can slay the wealthy dragon, maybe an MVP award, and the pain and suffering of an entire Nation:

Like i said, I love it when sports matter.  These things happen.

I just overheard someone ripping on Ben Affleck.  Say what you will about him – with JLo and Gigli he doesn’t have much wiggle room – but he does have 3 of the better monologues in the past 15 years. They are:

The job interview of Good Will Hunting:

The middle of Boiler Room:

The end of Chasing Amy:

I personally like the interview the best. He also has made (adapted and directed) the best Boston movie I know of in Gone Baby Gone. The Departed is great but Baby is better and more boston-ish.

A city speaks to you mostly by accident—in things you see through windows, in conversations you overhear. It’s not something you have to seek out, but something you can’t turn off.

I just moved to a new city and i couldn’t agree more with this statement. Over the past 10 years, I’ve lived in Palo Alto, Boston, New York, Hanover and most recently Washington DC and each one was a completely different experience. The people, the structure, the transportation, and the values all contribute to the conversation.  There is a feel to each city.  It’s very real

The article written here is called Cities and Ambition. It’s a great little essay and it argues that Cambridge is the intellectual capital of the world. He also comments on Los Angeles and it’s culture, saying:

The big thing in LA seems to be fame. There’s an A List of people who are most in demand right now, and what’s most admired is to be on it, or friends with those who are. Beneath that the message is much like New York’s, though perhaps with more emphasis on physical attractiveness. Only a few weeks in and i can already tell that LA is a place that has several languages. The people “in the industry” have one culture and everyone else has another. One thing i have noticed is how entreprenurial people are in LA. One person remarked that this is because people have to be self-promoting in the entertainment industry. I’m not so sure. I think it’s because of two things in LA. First, there aren’t alot of steady, traditional jobs. Sure there are lawyers and consultants and bankers but most people in entertainment and “the industry” do not have a salary but instead or work for hire type people. Second, it’s cheap to live in LA. You can get a cheap apartment right in the middle of the city. So you mix lots of jobs that people can try for with an affordable surroundings and you get lots of people trying new things to make a buck or become famous.

The article also talks about ambition in general. Saying:

So far the complete list of messages I’ve picked up from cities is: wealth, style, hipness, physical attractiveness, fame, political power, economic power, intelligence, social class, and quality of life. I’d always considered ambition a good thing, but I realize now that was because I’d always implicitly understood it to mean ambition in the areas I cared about. When you list everything ambitious people are ambitious about, it’s not so pretty.

It is interesting to think about and makes you wonder which is worse, ambition of something ugly or no ambition at all?

I have loved living in the big cities of America. They are all different but great places that have changed my worldview. I’ve met very different and interesting people in all of them. I do believe it’s true that you don’t have to be raised in a city, and you don’t have to live in one later in life, but at some point you need to be surrounded by the conversations and the ambition that can be found in and about the bright lights of a big town. Or as the author says:

The Impressionists show the typical pattern: they were born all over France (Pissarro was born in the Carribbean) and died all over France, but what defined them were the years they spent together in Paris. 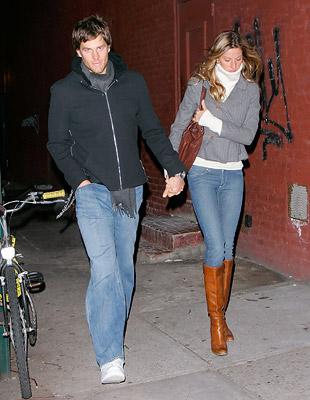 I am pretty sick of hearing about the Patriots, their quest to perfection and all that.  I am forever destined to curse the entire Boston area for stealing all of the good Minnesotans.  First is was David Ortiz and Doug Mientkiewicz going to the Red Sox, then it was Moroney going to the Pats and Kevin Garnett going to the Celtics.  The final straw was seeing Randy Moss catching passes as a Patriot. It just drives me nuts.  It’s as if Minnesota is the JV team to New Englands Varsity squad.  It just hurts so much

I did like Klosterman’s recent article about the meaning of perfection and how Brady and the Pats relate.  Check it out here.