I just finished the book I Am Legend.

The book is about, well here’s the synopsis…. 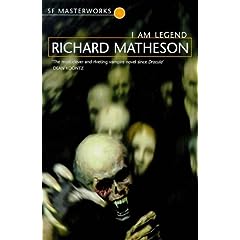 A terrible plague has decimated the world, and those who were unfortunate enough to survive have been transformed into blood-thirsty creatures of the night. Except, that is, for Robert Neville. He alone appears to be immune to this disease, but the grim irony is that now he is the outsider. He is the legendary monster who must be destroyed because he is different from everyone else.

I really liked the book. It is a quick and entertaining read – especially for being written in 1954. I’m not really in to vampires, but this isn’t about vampires. It’s about a man who is the last man on earth and he’s trying to deal with being alone, and trying to figure out what has happened to the rest of his race. I’d recommend this to anyone looking for some light summertime reading

There are periods when Neville’s coping with his solitary existence – sometimes he drinks himself into a coma and other times he just zones out for months at a time. It reminded me of Cast Away when Tom Hanks was just dealing with being stranded. It is interesting to read and to get inside the head of a character like that. Cast Away had over 40 minutes of silence, but in I am Legend you a exposed to the inner thoughts of the survivor. I can only imagine what it would do to a man – but it sure makes for good reading.

I have heard that there is a movie of I Am Legend coming out where Will Smith plays Neville.  I’m not sure how this will translate to the big screen as there are only 2 characters in the entire book but i could see it being similar to Misery and V for Vendetta.  Anyone heard anything else?