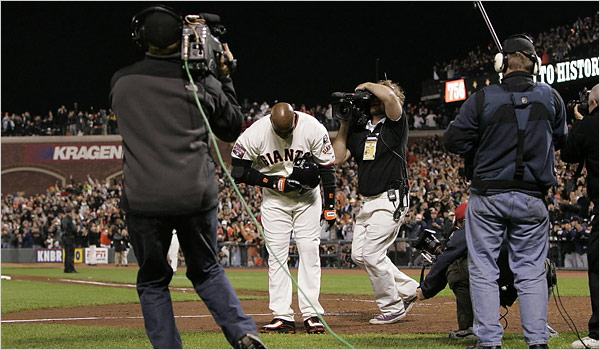 Some people have asked me what i think about Bonds breaking the record.  In general i’m against it but i do recognize it as impressive.  I think Klosterman said it best (article here) over a year ago when he was close to breaking Babe’s record….

At some point in the immediate to near future, someone is going to throw Barry Bonds a strike when he should be seeing a ball, and he will rake it with extreme prejudice. His propulsive, compact swing will rock the sphere toward the roof of the troposphere; it will fall to earth roughly 440 feet from where Bonds is standing, and he will react as if he is: (a) unimpressed or (b) vaguely annoyed.

This is a problem.

The reason we keep statistics — and the reason we care about statistical milestones — is that we assume some sort of emotional experience will accompany their creation and obliteration. These moments are supposed to embody ideas that transcend the notion of grown men playing children’s games; these moments are supposed to be a positive amalgamation of awe, evolution, inspiration, admiration and the macrobiotic potential of man. But the recent success of Bonds contains only two of those qualities, and maybe only the first.

It’s hard to feel good about that. Bonds is a self-absorbed, unlikable person who has an adversarial relationship with the world at large, and he has (almost certainly) used unethical, unnatural means to accomplish feats that actively hurt baseball. His statistical destruction of Ruth is metaphoric, but not in a good way. It’s an indictment of modernity, even for people who don’t give a damn about the past or the present.

Read the rest of the article here

Nike soccer
Video of the Day: This Will Blow Your Mind
Treadputer
Knee Surgery