Saw 2 movies this weekend: Atonement and The Golden Compass 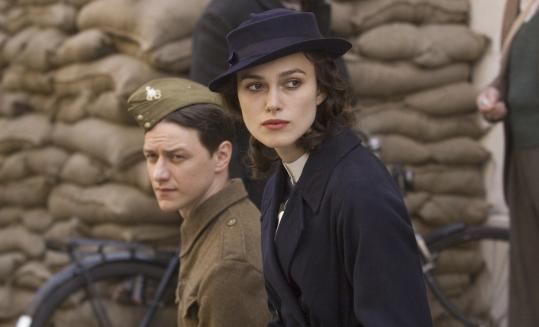 Atonement has lots of hype. I read comments like, “This is one of the year’s best films, a certain best picture nominee.” (from Ebert) on Friday and was really excited to go see it. I left the theater disappointed. The first half is great – it’s a great setup. The set of circumstances that destroy the lives of the 3 main characters is done extremely well and it’s very fun to watch. However, once the *main event* happens, there’s about an hour of crap.  We see McEvoy and Knightly’s lives go down.  There’s very little dialogue – just the two of them in different locations feeling miserable for 60 minutes.  I like the concept of the movie and the cinematography is incredible, but i just didn’t feel it.  Don’t believe the hype

The Golden Compass on the other hand is amazing. It’s a fairy tale similar to Harry Potter or Chronicles of Narnia.  I thought Naria was horrible but have always found the Potter movies to be pretty good.  The Golden Compass is easily as good as the Potter films if not better. I wasn’t as familiar with Compass so i was pleasantly surprised with the plot and the story. I love the concept of each person having a daemon representing your soul in the shape of an animal.  It adds an entirely other element to all conflict and interaction and makes it much more fun to watch.  I thought the story was captivating and the characters were all impressive to watch: the polar bear was awesome, Nicole Kidman was very hot and just as creepy, and the main british girl was GREAT.  I’d recommend you check it out.

The entire time i was trying to think which animal my soul would be – i’m still not sure but i’m leaning towards a kangaroo.

Wes Anderson's short film
Avatar Thoughts
Like Movies and Want to Waste Some Time?
Kimmel's Response to Sarah and Matt